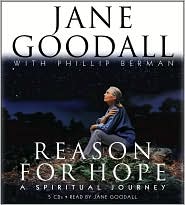 Dr. Jane Goodall's revolutionary study of chimpanzees in Tanzania's Gombe preserve forever altered the very definition of "humanity." Now, in a poignant and insightful memoir, Jane Goodall explores her extraordinary life and personal spiritual odyssey, with observations as profound as the knowledge she has brought back from the forest. As a toddler she was entranced by all living things, and over the years the little girl inspired by Tarzan and The Jungle Book became the woman who found herself working with famed paleontologist Dr. Louis Leakey; accomplished scientific breakthroughs in Gombe; and, ultimately, became a champion of the environment. It has been a life blessed with faith, resolve, and purpose, though not without its crises. Jane Goodall endured the horrors of the London blitz and World War II, postwar hardships, vicious rumors and "establishment" assaults on the integrity of her work, a terrorist attack and hostage taking in Africa, and her husband's slow, agonizing death. But throughout, her religious convictions, although tested, have helped her survive-and Jane Goodall's pursuit of science has enhanced, not eroded, her belief in God. In this book she candidly shares her life—talking of the love and support of her mother, her son, her late husband, of friends and strangers—as well as the Gombe chimpanzees she introduced to the world nearly forty years ago. And she gives us convincing reasons why we can and must open ourselves to the saints within each of us. At one with nature and challenged by the man-made dangers of environmental destruction, inequality, materialism, and genocide, Dr. Goodall offers insight into her perceptions of these threats and celebrates the people who are working for earth's renewal. Here, indeed, is Reason For Hope.

JANE GOODALL was born in London on April 3, 1934 and grew up in Bournemouth, on the southern coast of England. In 1960 she began studying chimpanzees in the wild in Gombe, Tanganyika (now Tarzania). After receiving her doctorate in ethology at Cambridge University, Dr. Goodall founded the Gombe Stream Research Center for the study of chimpanzees and baboons. In 1975 she established the Jane Goodall Institute for Wildlife Research, Education, and Conservation to promote animal research throughout the world.

Well, considering that I think of Jane Goodall as practically a mentor or role model for myself, I was thrilled when my mother gave me this a couple of years ago. I just had to find it again, as I had accidentally packed it away.

So I recently found it and deemed it time to dive in. This was the abridged version, so it went fairly quick.

I love that Goodall narrated this herself. I could listen to her speak all day long! This book wasn't really that much about the chimps of Gombe, but about (as the title would indicate) her spiritual journey. Full of spiritual growth and discovery, and answering some questions that she often gets like how she can stand to go into laboratories and see chimps confined in tiny cages for experimentation and not go off on people, and whether she has any hope for the human race and our future and that of the earth, the abridged version just left me hankering for more. Now I'm thinking that this might be a good way (audiobooks) to explore all of her writings!

Loved, loved, loved this audiobook! Jane Goodall is compassionate, grounded and reasonable, tempering scientific exploration with a spiritual grounding and strong emotional control. She's one of those rare scientists who believes in creationism as well as evolution. But even greater than that, she believes in the ability of the human race to redeem itself-- she believes in man. The only downside to this audiobook was that it was abridged, and left me hungering for more.

Two thumbs and ten toes up!