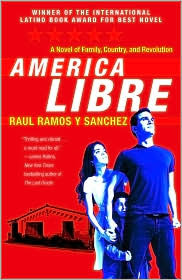 How will today's immigration crisis shape our nation? This provocative novel set in the second decade of the 21st century poses a chillingly credible nightmare vision . . . a Hispanic liberation movement seeking to redraw the borders of the United States.

After years of anti-immigrant backlash, anger seethes in the nation's teeming barrios. The crowded streets bristle with restless youth idled by a deep recession. When undercover detectives in San Antonio accidentally kill a young Latina bystander during a botched drug bust, riots erupt across the Southwest. As the inner-city violence escalates, Anglo vigilantes strike back with barrio shooting rampages. Exploiting the turmoil, a congressional demagogue succeeds in passing legislation that transforms the nation's Hispanic enclaves into walled-off Quarantine Zones. Amid the chaos in his L.A. barrio, Manolo Suarez is out of work and struggling to support his growing family. Under the spell of a beautiful Latina radical, the former U.S. Army Ranger eventually finds himself questioning his loyalty to his wife-and his country.

Fast-paced and action-packed, America Libre is a wake-up call to the dangers of extremism - on both sides of this explosive issue. 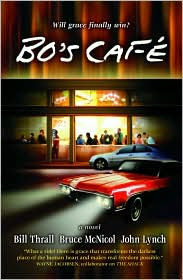 Bo's Cafe by John Lynch
Won from The Review Broads

High-powered executive Steven Kerner is living the dream in southern California. But when his bottled pain ignites in anger one night, his wife kicks him out. Then an eccentric mystery man named Andy Monroe befriends Steven and begins unravelling his tightly wound world. Andy leads Steven through a series of frustrating and revealing encounters to repair his life through genuine friendship and the grace and love of a God who has been waiting for him to accept it. A story to challenge and encourage, BO'S CAFE is a model for all who struggle with unresolved problems and a performance-based life. Those who desire a fuller, more authentic way of living will find this journey of healing a restorative exploration of God's unbridled grace.
Posted by nfmgirl at 8:00 AM

I've never heard of either one of these. Hope you enjoy them!! :)

Like Staci, I haven't heard of these. Happy reading!