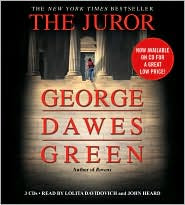 The Juror by George Dawes Green

Annie Laird is Juror 224. A sculptor with a career going nowhere. A single mother struggling to raise a son. A good citizen who has been summoned to what looks like a routine tour of civic duty. But the trial she is called to serve on is no ordinary trial. It is a mob trial, whose outcome has been meticulously orchestrated by a man of insidious power and deadly precision. A man who lives by the teachings of Lao Tsu ... whose magnetism is irresistible ... whose mind is as brilliant as it is twisted. He is known to some as the Teacher, and he's set his sights on Annie Laird. Pulled into the most chilling depths of the criminal underworld, Annie will be seduced by double-edged promises, stalked by the specter of terror, then, finally, driven to a shocking decision by the most basic motivation a woman can know. Graced with a rarely equaled mastery of style, peopled with a remarkable gallery of characters, and featuring one of the most compelling criminal minds in contemporary fiction, George Dawes Green's The Juror is a tour de force of crime and obsession, evil and innocence - a story that taps into fears so primal they linger long after the last page has been read.

This audiobook was abridged, and a very quick listen. Only three disks long, I got through it in two workdays. I thought that Lolita Davidovich and John Heard both did great jobs at narrating, and it was nice for a change having a woman to narrate a woman and a man to narrate a man.

I usually don't listen to the abridged versions of audiobooks for the reason you mentioned. I always want all of the story!

I'm with Nicole! I always feel like I'm missing something important with the abridged versions.