Holtzclaw hadn’t heard of Auraria until his employer sent him to destroy it. The tiny town, nestled into the curve of an unimportant mountain river, had no reputation among capitalists or tourists, but even insignificant places can be expensive to acquire. Holtzclaw rechecked his traveling bag—all the money was still there. The thousands of dollars in federal notes were just ordinary paper, but the gold coins were the strangest he had ever seen. Instead of eagles and shields, the coins were stamped with images of bumblebees, terrapins, chestnut trees, and indistinct figures by a stream. The figures might have been bathing or even panning for gold; they were too small to tell. Shadburn had said the coins were minted in Auraria from local metal. The gold was returning to its source.
Posted by nfmgirl at 8:27 AM No comments:

During his final days, William Hart was haunted by drowning dreams. Every night, at the sound of his shouts, Dez came awake herself, always briefly startled to find a husband-- Asa-- sleeping beside her. She would dash across the hall, fearing another heart attack, but by then her father would be lying quietly, gazing at the plaster ceiling. Probably half the town was having drowning dreams, she'd say, reminding him that the reservoir was an old rumor and ticking off good reasons why it would never happen-- the state had looked to Cascade before. If it was too expensive to build so far from Boston six years ago, then surely, in these hard times, nothing would come of it.

-- Cascade by Maryanne O'Hara
Posted by nfmgirl at 7:00 AM No comments:

SHARING: From closet to reading nook

What a great idea for an unused closet! Turn it into a reading nook...

REVIEW: The Names of Things by John Colman Wood

The anthropologist's wife, an artist, didn't want to follow her husband to the remote desert of northeast Africa to live with camel-herding nomads. But wanting to be with him, she endured the trip, only to fall desperately ill years later with a disease that leaves her husband with more questions than answers. When the anthropologist discovers a deception that shatters his grief and guilt, he begins to reevaluate his love for his wife as well as his friendship with one of the nomads he studied. He returns to Africa to make sense of what happened, traveling into the far reaches of the Chalbi Desert, where he must sift through the layers of his memories and reconcile them with what he now knows. Set in a windswept wilderness menaced by hyenas and lions, The Names of Things weaves together the stories of an anthropologist's journey into the desert, his firsthand accounts of the nomads' death rituals, and his struggle to find the names of things for which no words exist. Anthropologist John Colman Wood's debut novel is an exquisite, haunting exploration of the meaning of love and the rituals of grief.

About the Author
from Goodreads

John Colman Wood teaches at the University of North Carolina at Asheville. His field research with Gabra nomads of northern Kenya and southern Ethiopia has been funded by the Wenner-Gren Foundation, the National Geographic Society, and the Max Planck Institute for Social Anthropology.

His fiction has appeared in Anthropology and Humanism, and he has twice won the Ethnographic Fiction Prize of the Society for Humanistic Anthropology, once for a story extracted from The Names of Things.

He is the author of When Men Are Women: Manhood among Gabra Nomads of East Africa (University of Wisconsin Press, 1999). Before becoming an anthropologist, Wood was a journalist.


She hung the canvas on the wall of the studio. I'd seen her start paintings dozens of times, but for some reason-- perhaps because of how things turned out-- this one has stayed with me. The canvas was square, a little taller and wider than her reach. the surface was primed bluish white, thick enough to mask the texture. Despite its bulk the frame was empty, a window unto snow.

An anthropologist goes on a pilgrimage across northeast Africa after the death of his wife, coming to terms with her loss and wondering whether he really even knew her at all.

This story is at once very simple, getting to the heart of the matter, without excessive flourish or glamor, and yet it is complex, winding around on itself. There isn't a great amount of dialogue in the book, as the majority of the story is self-discovery and the discovery of truth. All of his interaction in the story is with the Africans he encounters and stays with during his journey, and they are a simple and quiet people, not given to excessive chatting.

There are some interesting transitions between chapters where bits of the Dasse culture are revealed. The author writes of "rituals that surround death and dying". For example:


There is a strict division of labor at a Dasse burial: Men dig the grave, lower the body, fill the grave, cover it; women, prepare the body and cook food for the men to eat afterward. Men say women are too emotional to prepare the grave. If they helped, one man said, they would do more crying than digging. Women are not even supposed to come near. You wonder, if women are so emotional, how they manage the intimacies of the body itself.

After his artist wife dies from an unnamed disease that sounds suspiciously like AIDS, the anthropologist begins to look through her journal and questions arise, causing him to embark on a trek back to the village of his friend Abudo, in hopes of finding answers.

My final word: This was an enjoyable read, and went fairly quickly. The author is very adept at bringing you into the story with lovely description that isn't overdone, and a writing style that can flow from verbose to rather clipped, the anthropologist varying from very logical reasoning that examines his own life with scientific precision to reflecting on beautifully sensitive and emotional moments with his wife in their life together. A lovely little story.

Amazon
Barnes and Noble
But the Nook book now for only $2.99!

I received a copy of this book to review through the LibraryThing Early Reviewers, in exchange for my honest opinion. I was not financially compensated in any way, and the opinions expressed are my own and based on my observations while reading this novel.
Posted by nfmgirl at 3:43 PM No comments:

What an awesome bookcase! Thanks to Rapid Reads for sharing! 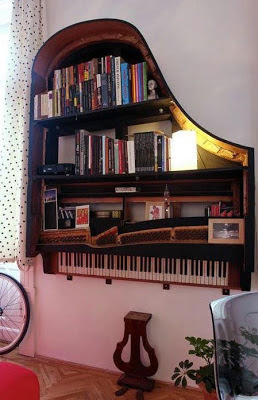 Posted by nfmgirl at 9:57 PM No comments:

Introducing... The People of Forever are Not Afraid by Shani Doianjiu

History is Almost Over

There is dust in this caravan of a classroom, and Mira the teacher's hair is fake orange and scorched at the tips. We are seniors now, seventeen, and we have almost finished all of Israeli history. We finished the history of the world in tenth grade. In our textbook, the pages already speak to us of 1982, just a few years before we were born, just a year before this town was built, when there were only pine trees and garbage hills here by the Lebanese border. The words of Mira the teacher, who is also Avishag's mother, almost touch the secret ones of all our parents in their drunken evenings.

History is almost over.
Posted by nfmgirl at 11:52 AM No comments:

SHARING: The state of bookstores in the NE

We all know of the devastation left in the wake of Sandy. Being book bloggers, we may be especially interested in the state of bookstores hit by Sandy. The LA Times gives us a little glimpse. Check it out!

Looking to help those affected by Sandy? How about donating to the Red Cross?

And NBC will host a telethon tonight from 8 PM to 9 PM EST to raise money for the American Red Cross. Read more about it on Arts Beat at the NY Times.

Mama always told me bad things happen on Wednesdays, 'cause it's the middle of the week and the Lord just ain't looking then. I never really understood what she meant by that, because I thought the Lord was always supposed to be looking. But her explanation still consoled me when the goats got into the saltbox and Mr. Ashmore took the switch to me for it, or when my stomach was growling at night because rabbits had gobbled up our small garden and all we had to eat that summer was Johnnycakes.

I'm grown now, and Mama's long since gone. But, oh, how I pray she was wrong about Wednesdays and that the Good Lord is looking down on York County, Pennsylvania every day.
Posted by nfmgirl at 8:00 AM No comments: