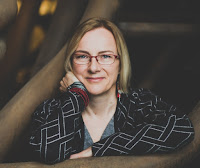 I received a copy of this book to review through TLC Book Tours and the publisher, in exchange for my honest opinion. I was not financially compensated in any way, and the opinions expressed are my own and based on my observations while reading this novel. The book that I received was an uncorrected proof, and quotes could differ from the final release.
Posted by nfmgirl at 4:34 PM 1 comment: