Two girls are forced into the woods at gunpoint. One runs for her life. One is left behind…

Twenty-eight years ago, Charlotte and Samantha Quinn's happy small-town family life was torn apart by a terrifying attack on their family home. It left their mother dead. It left their father — Pikeville's notorious defense attorney — devastated. And it left the family fractured beyond repair, consumed by secrets from that terrible night.

Twenty-eight years later, and Charlie has followed in her father's footsteps to become a lawyer herself — the ideal good daughter. But when violence comes to Pikeville again — and a shocking tragedy leaves the whole town traumatized — Charlie is plunged into a nightmare. Not only is she the first witness on the scene, but it's a case that unleashes the terrible memories she's spent so long trying to suppress. Because the shocking truth about the crime that destroyed her family nearly thirty years ago won't stay buried forever…

Packed with twists and turns, brimming with emotion and heart, The Good Daughter is fiction at its most thrilling. 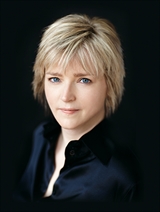 Karin Slaughter is one of the world’s most popular and acclaimed storytellers. Published in 36 languages, with more than 35 million copies sold across the globe, her sixteen novels include the Grant County and Will Trent books, as well as the Edgar-nominated Cop Town and the instant New York Times bestselling novel Pretty Girls. A native of Georgia, Karin currently lives in Atlanta. Her Will Trent series, Grant County series, and standalone novel Cop Town are all in development for film and television.


Samantha Quinn felt the stinging of a thousand hornets inside her legs as she ran down the long, forlorn driveway toward the farmhouse.

Two young sisters share a horrible experience as teenagers, and are left motherless, battered and broken. Jump forward 28 years to little sister Charlie-- the "good daughter" who followed in her father's footsteps to become a lawyer and stayed close to home. But she's hit a bad stretch in life, estranged from her husband and caught in the center of a local tragedy. Her past is nipping at her heels once again, demanding to be confronted.

I became a fan of the author with her best selling novel Pretty Girls. I learned then just how good the author is at writing multi-dimensional characters with which you can really identify, and she understands the complexities of familial and romantic relationships. Her characters are very human and flawed. You see both the good and the bad in them, and find yourself rooting for them to work it all out.

My biggest complaint with the author is that she will throw in some twists and turns that push the limits of feasibility, and it can cause me to be pulled out of the story as I think, "Hmmm...that seems a little unrealistic."

My final word: While there are moments in her stories that stretch the boundaries of my ability to "suspend disbelief", overall I really enjoy this author. Her writing is very "readable", but her stories aren't too simplistic or dumbed-down. Her characters have depth, the storyline in this story has some twists and turns and can keep you guessing. There is some humor to make you smile, sentimentality to bring tears, a roller-coaster of emotions. The author writes fallible characters, and she offers strong female leads who are yet still human and flawed. Her books make for good beach reads, or with which to curl up in a comfy chair this winter.

I received a copy of this book to review through TLC Book Tours and the publisher, in exchange for my honest opinion. I was not financially compensated in any way, and the opinions expressed are my own and based on my observations while reading this novel.
Posted by nfmgirl at 1:57 PM 1 comment: