REVIEW: Cut the Sugar, You're Sweet Enough by Ella Leche 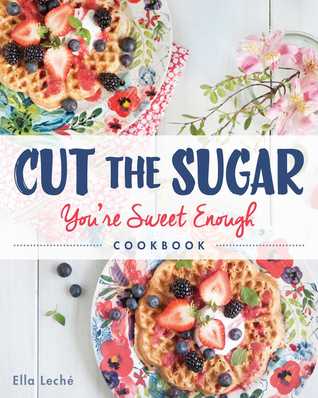 Cut the Sugar, You’re Sweet Enough is a practical, real-life approach to reducing sugar the healthy way so you don’t feel deprived. This is not a sugar-detox book but an inspiring cookbook and guide to change your relationship with the foods you love and address your cravings properly. There are over 100 delicious and easy recipes for breakfast, lunch, dinner, snacks, and yes, even dessert!

Ella Leché, the voice behind the popular food blog Pure Ella, used to consider herself a healthful eater. She ate salads; she drank water. But like so many of us, she also looked forward to her daily sweet treats. It wasn’t until her health fell apart due to a rare illness that she began to make the food-health connection.

Back in 2008, just months after the birth of her first child, Ella developed debilitating weakness to the point where she collapsed numerous times. She had difficulty getting up from the bed and could barely breathe and eat. The diagnosis was myasthenia gravis, a neuromuscular autoimmune condition for which there is no medical cure. The medication she was put on wasn’t helping, and she decided to try and heal through food. She treated candida and eliminated many culprits such as processed foods, wheat, dairy, and, most important, sugar. Slowly she began to feel stronger and healthier. She found sugar was also triggering her frequent headaches, mood swings, and energy slumps. Now she is inspiring others to eat healthier and apply her approach to cut the sugar, not quit sugar entirely!

With emphasis on real, nutrient-dense whole foods—all presented deliciously and beautifully photographed by Ella herself and written in her encouraging, upbeat, grounded voice—Cut the Sugar is an inspirational and accessible guide to the sweet life . . . because you’re sweet enough already!

Recipes include both fan favorites as well as many all-new offerings, including:

Sugar is my arch-enemy. I could live on sugar... well, emotionally I could live on sugar. Physically sugar is killing me. Last summer I tried the Whole 30 diet, which was a strict elimination diet that required I avoid lots of things, and one of those was sugar. And I mean avoidance to the nth degree! You were supposed to completely eliminate all refined sugar. Not even things like mayonnaise or ketchup were allowed. And I noticed a lot of physical changes during this 30 day elimination-- positive changes. My skin cleared up, my cough disappeared, I no longer felt bloated, and I had more energy. I'm not sure how many of those changes can be attributed to the elimination of refined sugar, or how many were influenced by the other things I had eliminated like grains, but there was a marked difference.

And then the 30 days were over, and the sugar crept back into my diet. I swear I'm hopeless, but I keep trying.

So I grabbed this book when it became available on Netgalley.

The book begins with the author's story. She tells of her debilitating health issues, and how eliminating sugar from her diet resolved those issues.

Then she offers an introduction to sugar, and the easy steps to eliminating sugar. She teaches you how to fill your pantry with "superfoods" to help you not miss the sugar. Things like Cinnamon, Cacao Powder and Nutritional Yeast.

She educates you on how to sprout beans, lentils and seeds, and how to make your own nut and seed milk, i.e. almond milk.

The cover of this book shows waffles and fruit, and the cheerful colors of red, white and blue. And as you begin paging through it you see strawberries and lemons, and this got me expecting that this cookbook would be more desserts and breakfast. You know, healthier alternatives for sweets.

However it wound up being more about alternatives to sweets. It categorizes recipes by Breakfast, Salad & Appetizers, Soups, Mains & Sides, Desserts, Snacks and Drinks. It offers up the normal breakfast options like oatmeal and yogurt parfaits, and then other high protein options like Avocado Toast, or Caramelized Onion, Leek & Potato Chickpea Frittata.

My final word: This book is a good option for some, but not for me. It uses a lot of gluten-free ingredients (and I'm not looking to go gluten free, although you could probably easily use gluten options instead), and it uses sweeteners like stevia and rooibos (another thing I'm not looking to get into). Some of the recipes intrigue me (like Chocolate-Cherry-Chia Pudding), but many of the recipes (particularly those for the mains and sides) I just have no interest in. They simply don't suit my taste buds. It has beautiful photography and is informative, but it just isn't a good fit for me.

I received a copy of this book to review through Netgalley, in exchange for my honest opinion. I was not financially compensated in any way, and the opinions expressed are my own and based on my observations while reading this novel.
Posted by nfmgirl at 9:11 AM No comments:

Introducing books through the first chapter or so...

About this time, a bloody transaction occurred in the territory of the present county of Conecuh... The party consisted of a Hillabee Indian, who had murdered so many men, that he was called Istillicha, the Man-Slayer-- a desperate white man, who had fled from the States for the crime of murder, and whom, on account of his activity and ferocity, the Indians called the Cat-- and a blood-thirsty negro, named Bob.

Albert James Pickett, History of Alabama, and Incidentally of Georgia and Mississippi, from the Earliest Period (1851)

Winner of the 1933 Femina Vie Heureuse Prize, COLD COMFORT FARM is a wickedly funny portrait of British rural life in the 1930s. Flora Poste, a recently orphaned socialite, moves in with her country relatives, the gloomy Starkadders of Cold Comfort Farm, and becomes enmeshed in a web of violent emotions, despair, and scheming, until Flora manages to set things right.

Her first novel, Cold Comfort Farm, won the Femina Vie Heureuse Prize for 1933. A satire and parody of the pessimistic ruralism of Thomas Hardy, his followers and especially Precious Bain by Mary Webb -the "loam and lovechild" genre, as some called it, Cold Comfort Farm introduces a self-confident young woman, quite self-consciously modern, pragmatic and optimistic, into the grim, fate-bound and dark rural scene those novelists tended to portray.


The education bestowed on Flora Poste by her parents had been expensive, athletic and prolonged; and when they died within a few weeks of one another during the annual epidemic of the influenza or Spanish Plague which occurred in her twentieth year, she was discovered to possess every art and grace save that of earning her own living.

Flora is a young single woman of nineteen years who has found herself orphaned after losing her parents during a flu outbreak. Now alone with only a modest annual allotment to sustain her, and no desire to marry or work in order to support herself, she has to decide who she will choose to take her on and see to her well being.


"I am only nineteen, but I have already observed that whereas there still lingers some absurd prejudice against living on one's friends, no limits are set, either by society or by one's own conscience, to the amount one may impose upon one's relatives."

She chooses to go live with distant relatives in Sussex, who seem to feel some sort of obligation toward her, due to a mysterious wrong that was done to her father Robert Poste.

My final word: I loved the description of the house in Sussex and its history, and the names of the dairy cows: Graceless, Pointless, Feckless and Aimless. This story was very symbolic. I didn't catch the symbolism at first, but by the end of the story I was picking up on it. There were odd character names, like Mrs. Smiling (who was actually a bit of a downer) and Mr. Mybug. And then there’s landmarks like Ticklepenny’s Field. Quirky and outrageous, and a bit farcical, this story had its moments, but overall it fell flat. I think it would make a much better play or BBC series than book, giving the story a little life that is currently missing.

This book was the December 2015 selection for the Cape Coral Bookies.

Posted by nfmgirl at 5:01 PM No comments: