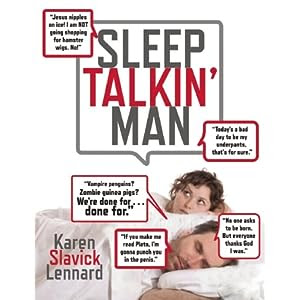 Karen Slavick met Adam Lennard in 1991 on a kibbutz in Israel, where he declared his love for her by passing out in her bed while he waited for her to return from a midnight swim. Understandably, she never forgot him. Over a decade later, they rekindled their romance and married— but then he fell asleep again, and all hell broke loose. Though he’ s a romantic and mild-mannered Englishman by day, Adam quickly morphs into the uproariously foul-mouthed, vegetarian-hating, wildlife-obsessed character beloved by millions as Sleep Talkin’ Man, and Karen has the audio tapes to prove it.

These gems and more are interspersed with the fantastic conversations Karen and Adam have when he wakes, in which he attempts to interpret for Sleep Talkin’ Man, and stories that recount how love can bloom— even when your beloved is a nocturnal maniac. By turns crude and charming, Don’ t Let the Midget Out of the Wardrobe is a hilariously candid journey into one man’s dreamland.

(Note: I think this synopsis from Goodreads needs to be corrected, as it seems to mixup Sleep Talkin' Man with Don't Let the Midget Out of the Wardrobe, which was published June 5th 2012, but seems very similar to Sleep Talkin' Man.)


About the Author
from Facebook (since I can't find a bio for her, I took this from her Facebook profile)

As a child, my favorite pastime was dissecting fresh fish and labeling their fishy little parts on paper towels. I spent my teenagehood making an art of late-night public fountain splashing, one of the few diversions available to minors in Jersey. Somehow, paradox seems to define me: I'm wildly silly and intensely serious, unabashedly impulsive and overly analytical. I've lived on four continents, although I often play the homebody. Despite my well-earned cynicism, I'm far more naive and idealistic than I have any right to be.

I own my own power tools, and I wield them with panache. I am a firm believer in mutual worship. Dancing is one of my greatest passions. I read voraciously and the right music slays me. Ripe avocado rocks my world, as does This American Life.

I feel on track when I manage to back up my convictions with actions: I have volunteered for the last three elections and I’m lucky to work for a company that’s trying to do good in the world. My obsession with all creatures furry or feathered dictates that my holidays every year are spent volunteering at animal sanctuaries around the world. I have spent days snuggling elephants, nursing monkeys, nuzzling sloths, bottle-feeding otters, and massaging lions.

My desires are too numerous for this silly little square: I want to study elephants in Africa, and sing in a smoky blues bar, and live on a houseboat, and operate on human brains, and rhumba in the rain.


"Hold me. I want you to feel greatness."

"Oompa loompas don't sing in heaven. They tidy up the clouds."

"Scientists in the future will completely struggle to work out how you were ever classified as an intelligent life form."

By day Adam Lennard is a kind, compassionate, and mild-mannered Englishman. By night he is crude, brash, insulting and threatening-- but very funny and very, very clever!

Soon after moving in together, Adam's girlfriend Karen (who herself is an insomniac) was startled to find Adam blurting outrageous remarks during his sleep. She began documenting his nocturnal expressions, and sharing them with family and friends. Eventually she invested in recording equipment to catch his regular utterings, and created a blog through which to share.

Now she is sharing it all through her new book simply titled Sleep Talkin' Man.

I became a fan of Sleep Talkin' Man (STM) through their blog, and have followed off and on for over a year. So I was happy to jump at the chance to read and review this book!

First let me say that visually I didn't find the layout very appealing, but I'm afraid that I'm not sure what to suggest to improve it. I kept finding all of the different fonts and sizes annoying. However I understand that they were attempting to make it interesting, rather than just have a bunch of quotes running down in a list with nothing of interest to catch the eye. Again...I'm afraid that I don't know how to resolve the issue with the layout, nor know how to clarify just what about it annoyed me so much!

And I'm not sure whether it's because it's an ARC, or if it will be the same in the finished copy, but the fact that there are no chapter numbers or names is a little disorienting.

Portions of the book are about their lives and a sort of memoir, and not about his sleep talking. I guess they needed more to write about, or it would just be 20 pages of sleep talkin' quotes! Some of the background was enjoyable to read, but by the time I got near the end of the book and reached a story about Adam getting a kitten from the SPCA at the age of nine, I was feeling as if they (the author? the editor?) were just stretching things out to give the book more mass and depth, and I found it getting a little tiresome.

But the meat of the book are the quotes, and they are everything fans of STM have come to love and expect. Some mutterings are sweet and innocent, some are devious and evil, and yet others are crude and offensive. But nearly all are just plain funny!

My final word: If you enjoy humor (especially crass and even cruel humor) and want to experience the mystery that is nocturnal speech and the unconscious mind, grab this one. You'll laugh yourself to sleep at night!

I received a copy of this book to review through Netgalley, in exchange for my honest opinion. I was not financially compensated in any way, and the opinions expressed are my own and based on my observations while reading this novel. The ebook that I received was an uncorrected proof, and quotes mentioned here could differ in the finished copy.
Posted by nfmgirl at 8:52 AM

You’ve probably heard that good communication is the cornerstone
of every successful marriage. There’s a reason for that – it’s true.

Here’s an effective strategy for validating your spouse in every
conversation. It will instantly strengthen the bond between you both.

Seriously, this is a game changer that will transform your marriage instantly!

>> Transform Your Marriage in Minutes <<

Talk to you soon,