REVIEW: Zan-Gah: A Prehistoric Adventure and Zan-Gah and the Beautiful Country by Allan Richard Shickman 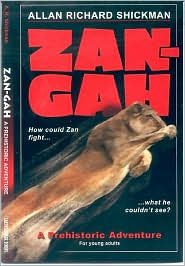 The hero, Zan-Gah seeks his lost twin in a savage prehistoric world, encountering suffering, captivity, conflict, love, and triumph. In three years, Zan-Gah passes from an uncertain boyhood to a tried and proven manhood and a position of leadership among his people. Themes: survival, cultures, gender roles, psychological trauma, nature's wonders and terrors. 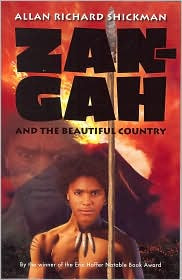 The prehistoric saga continues in Zan-Gah and the Beautiful Country, the sequel to the award winning Zan-Gah: A Prehistoric Adventure. In this story, Zan’s troubled twin brother, Dael, having suffered greatly during his earlier captivity, receives a ruinous new shock when his wife suddenly dies. Disturbed and traumatized, all of his manic energies explode into acts of hostility and bloodshed. His obsession is the destruction of the wasp men, his first captors, who dwell in the Beautiful Country. When he, Zan-Gah, and a band of adventurers trek to their bountiful home, they find that all of the wasp people have died in war or of disease. The Beautiful Country is empty for the taking, and Zan’s people, the Ba-Coro, decide to migrate and resettle there. But the Noi, Dael’s cruelest enemies and former tormentors, make the same migration from their desert home, and the possibility develops of contention and war over this rich and lovely new land.

Artist, teacher, author, and historian Allan Richard Shickman was an art history professor at the University of Northern Iowa for three decades. His first novel, Zan-Gah: A Prehistoric Adventure won an Eric Hoffer Notable Book Award and was a finalist for the ForeWord Magazine Book of the Year Award.

This is a good adventure story that I think I would have have been interested in around the age of 12. It would be good for the "tween" group-- appealing to the Judy Blume sect and middle-schoolers. Zan-Gah is an admirable character, but some of the content is probably too advanced for younger kids.

Filled with drama and adventure, it was a light and fun read for me as an adult. It may be more intense for the younger crowd.

Email ThisBlogThis!Share to TwitterShare to FacebookShare to Pinterest
Labels: Review