Flight Behavior transfixes from its opening scene, when a young woman's narrow experience of life is thrown wide with the force of a raging fire. In the lyrical language of her native Appalachia, Barbara Kingsolver bares the rich, tarnished humanity of her novel's inhabitants and unearths the modern complexities of rural existence. Characters and reader alike are quickly carried beyond familiar territory here, into the unsettled ground of science, faith, and everyday truces between reason and conviction.

Dellarobia Turnbow is a restless farm wife who gave up her own plans when she accidentally became pregnant at seventeen. Now, after a decade of domestic disharmony on a failing farm, she has settled for permanent disappointment but seeks momentary escape through an obsessive flirtation with a younger man. As she hikes up a mountain road behind her house to a secret tryst, she encounters a shocking sight: a silent, forested valley filled with what looks like a lake of fire. She can only understand it as a cautionary miracle, but it sparks a raft of other explanations from scientists, religious leaders, and the media. The bewildering emergency draws rural farmers into unexpected acquaintance with urbane journalists, opportunists, sightseers, and a striking biologist with his own stake in the outcome. As the community lines up to judge the woman and her miracle, Dellarobia confronts her family, her church, her town, and a larger world, in a flight toward truth that could undo all she has ever believed.

Flight Behavior takes on one of the most contentious subjects of our time: climate change. With a deft and versatile empathy Kingsolver dissects the motives that drive denial and belief in a precarious world.


About the Author
from Goodreads 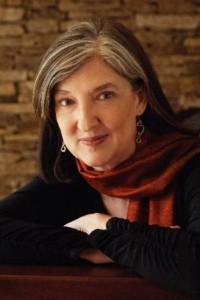 Barbara Kingsolver is an American novelist, essayist, and poet. She was raised in rural Kentucky and lived briefly in Africa in her early childhood. Kingsolver earned degrees in Biology at DePauw University and the University of Arizona and worked as a freelance writer before she began writing novels. Her most famous works include The Poisonwood Bible, the tale of a missionary family in the Congo, and Animal, Vegetable, Miracle, a non-fiction account of her family's attempts to eat locally.

Her work often focuses on topics such as social justice, biodiversity, and the interaction between humans and their communities and environments. Each of her books published since 1993 have been on The New York Times Best Seller list. Kingsolver has received numerous awards, including the UK's Orange Prize for Fiction 2010, for The Lacuna and the National Humanities Medal. She has been nominated for the PEN/Faulkner Award and the Pulitzer Prize.

In 2000, Kingsolver established the Bellwether Prize to support "literature of social change."

Kingsolver was born in Annapolis, Maryland in 1955 and grew up in Carlisle in rural Kentucky. When Kingsolver was seven years old, her father, a physician, took the family to the former Republic of Congo in what is now the Democratic Republic of the Congo. Her parents worked in a public health capacity, and the family lived without electricity or running water.

After graduating from high school, Kingsolver attended DePauw University in Greencastle, Indiana on a music scholarship, studying classical piano. Eventually, however, she changed her major to biology when she realized that "classical pianists compete for six job openings a year, and the rest of [them:] get to play 'Blue Moon' in a hotel lobby." She was involved in activism on her campus, and took part in protests against the Vietnam war. She graduated with a Bachelor of Science in 1977, and moved to France for a year before settling in Tucson, Arizona, where she would live for much of the next two decades. In 1980 she enrolled in graduate school at the University of Arizona, where she earned a Master's degree in ecology and evolutionary biology.

Kingsolver began her full-time writing career in the mid 1980s as a science writer for the university, which eventually lead to some freelance feature writing. She began her career in fiction writing after winning a short story contest in a local Phoenix newspaper. In 1985 she married Joseph Hoffmann; their daughter Camille was born in 1987. She moved with her daughter to Tenerife in the Canary Islands for a year during the first Gulf war, mostly due to frustration over America's military involvement. After returning to the US in 1992, she separated from her husband.

In 1994, Kingsolver was awarded an Honorary Doctorate of Letters from her alma mater, DePauw University. She was also married to Steven Hopp, that year, and their daughter, Lily, was born in 1996. In 2004, Kingsolver moved with her family to a farm in Washington County, Virginia, where they currently reside. In 2008, she received an Honorary Doctorate of Humane Letters from Duke University, where she delivered a commencement address entitled "How to be Hopeful".

In a 2010 interview with The Guardian, Kingsolver says, "I never wanted to be famous, and still don't, [...:] the universe rewarded me with what I dreaded most." She says created her own website just to compete with a plethora of fake ones, "as a defence to protect my family from misinformation. Wikipedia abhors a vacuum. If you don't define yourself, it will get done for you in colourful ways."


A certain feeling comes from throwing your good life away, and it is one part rapture.

This story takes place in the Appalachian Mountains.
Dellarobia is walking into the mountains on a fool's errand, ready to throw her life away, when she happens upon a magical sight-- a valley filled with Monarch butterflies. This story follows everything that happens after that moment-- the wonder, the confusion, the fear regarding what it all means.

This was my first Barbara Kingsolver book. I've heard such good things about her, and know how popular she is. So I was hoping to be blown away. Unfortunately I was not.

That's not to say it was a bad story. It wasn't. It had it's moments. I'll admit to a few tears and a few smiles. But for the most part, the book came off as just "eh" for me.

Dellarobia wasn't very likable in the beginning, although she became more so later on. She was just a whiny and complaining woman discontented with her life, and unappreciative of everything she has, focused only on what she doesn't have.

But life changes after the butterflies. She begins to remember the person she used to be-- who she wanted to become. She begins to see her life for what it really is, both good and bad. She finds herself once again.

My final word: While I embrace the author's attempts to draw attention to the issue of "climate change" and its consequences, this story just came off as overly-dramatic. Climate change is more of a whisper, it's subtle and quiet and sneaks up on you while you aren't looking. This book felt like a loud scream in a quiet forest. Yet, despite that, the book was almost boring at times, making me scan over descriptive text that I had no interest in. And I kept cringing at the cultural stereotyping that riddles the story. It felt uncomfortable to me. I mean, I understand cultural differences. I often ask our Puerto Rican office girl questions about the Puerto Rican culture. But there was something...I don't know...almost untoward about the constant stereotypes in this book. But overall it is a worthwhile read, if for no other reason than to open your eyes to the far-reaching implications of climate change.

My thanks to TLC Book Tours for allowing me to be part of this book tour.

Cover: B-
Writing Style: B
Characters: B+
Storyline/Plot: B+
Interest/Uniqueness: A-

I received a copy of this book to review through TLC Book Tours, in exchange for my honest opinion. I was not financially compensated in any way, and the opinions expressed are my own and based on my observations while reading this novel.
Posted by nfmgirl at 11:32 AM

Thanks for sharing your thoughts on this book for the tour.