From the author of the acclaimed The Curiosity comes a compelling and moving story of compassion, courage, and redemption

Deborah Birch is a seasoned hospice nurse whose daily work requires courage and compassion. But her skills and experience are tested in new and dramatic ways when her easygoing husband, Michael, returns from his third deployment to Iraq haunted by nightmares, anxiety, and rage. She is determined to help him heal, and to restore the tender, loving marriage they once had.

At the same time, Deborah's primary patient is Barclay Reed, a retired history professor and expert in the Pacific Theater of World War II whose career ended in academic scandal. Alone in the world, the embittered professor is dying. As Barclay begrudgingly comes to trust Deborah, he tells her stories from that long-ago war, which help her find a way to help her husband battle his demons.

Told with piercing empathy and heartbreaking realism, The Hummingbird is a masterful story of loving commitment, service to country, and absolution through wisdom and forgiveness. 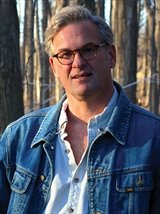 Stephen P. Kiernan is a graduate of Middlebury College, Johns Hopkins University, and the University of Iowa Writers’ Workshop. During his more than twenty years as a journalist, he has won numerous awards, including the Brechner Center’s Freedom of Information Award, the Scripps Howard Award for Distinguished Service to the First Amendment, and the George Polk Award. He is the author of The Curiosity, his first novel, and two nonfiction books. He lives in Vermont with his two sons.


All I knew at the beginning was that the first two nurses assigned to the Professor had not lasted twelve days, and now it was my turn.

Deborah Birch is a hospice nurse assigned to tend to Professor Reed in his final weeks or months. The Professor is known for being a bit...difficult. He's already gone through several hospice nurses, and Deborah doesn't hold out much hope that she'll last much longer. Even sweet Nurse Sara with her positive and upbeat personality only lasted three days with the Professor.

So what chance does Deborah have with Professor Reed?

But as it turns out, the Professor seems to have taken a liking of sorts to Nurse Birch. And at the end, he shares with her his yet unpublished final book about a little known story from WWII and a Japanese pilot by the name of Ichiro Soga.

Through the sharing of his book, the Professor is helping Deborah to better understand her husband Michael, who is an ex-soldier suffering from PTSD. As the Professor tells Nurse Birch...


"Whether the warrior is Ichiro Soga or your husband, regardless." The Professor shrugged. "First you must understand his weapons."

I really liked Nurse Deborah Birch. She is calm and level-headed and straight-forward. She is a woman of compassion and understanding, but she doesn't pull any punches.

Professor Reed is cantankerous, but I actually really liked him as well. He reminded me a bit of a family friend that just passed away at 93 years of age. Presenting with biting remarks and a sharp mind that is hard to contend with, even in his advanced years, he can be a handful. (Actually now that I say that, I realize he reminds a little bit of my father, but "meaner".)

I liked the author's writing. It is very easy to read, yet there is some depth to it. I was impressed with the research that must have gone into this story.

My final word: I enjoyed this book. The characters were likable and fleshed out. The writing I found to be insightful and compassionate. It's an easy read, but not too easy. It includes an interesting peek into World War II, as well as hospice care and therapy, and the sufferings of our soldiers returning home with PTSD. I was a little nervous going in, but actually wound up liking the book quite a lot. I think I will be recommending this one to my book club.

I received a copy of this book to review through TLC Book Tours and the publisher, in exchange for my honest opinion. I was not financially compensated in any way, and the opinions expressed are my own and based on my observations while reading this novel. The book that I received was an uncorrected proof, and quotes could differ from the final release.
Posted by nfmgirl at 5:57 PM

I hope your book club chooses to read this book - it seems to be one that lends itself to great discussion.