TLC BOOK TOURS and REVIEW: News of the World by Paulette Jiles 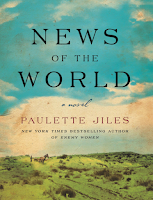 Longlisted for the National Book Award–Fiction

It is 1870 and Captain Jefferson Kyle Kidd travels through northern Texas, giving live readings to paying audiences hungry for news of the world. An elderly widower who has lived through three wars and fought in two of them, the captain enjoys his rootless, solitary existence.

In Wichita Falls, he is offered a $50 gold piece to deliver a young orphan to her relatives in San Antonio. Four years earlier, a band of Kiowa raiders killed Johanna’s parents and sister; sparing the little girl, they raised her as one of their own. Recently rescued by the U.S. army, the ten-year-old has once again been torn away from the only home she knows.

Their 400-mile journey south through unsettled territory and unforgiving terrain proves difficult and at times dangerous. Johanna has forgotten the English language, tries to escape at every opportunity, throws away her shoes, and refuses to act “civilized.” Yet as the miles pass, the two lonely survivors tentatively begin to trust each other, forging a bond that marks the difference between life and death in this treacherous land.

Arriving in San Antonio, the reunion is neither happy nor welcome. The captain must hand Johanna over to an aunt and uncle she does not remember—strangers who regard her as an unwanted burden. A respectable man, Captain Kidd is faced with a terrible choice: abandon the girl to her fate or become—in the eyes of the law—a kidnapper himself. Exquisitely rendered and morally complex, News of the World is a brilliant work of historical fiction that explores the boundaries of family, responsibility, honor, and trust.

Paulette Jiles is a novelist, poet, and memoirist. She is the author of Cousins, a memoir, and the novels Enemy Women, Stormy Weather, The Color of Lightning, Lighthouse Island, and News of the World. She lives on a ranch near San Antonio, TX.


Captain Kidd laid out the Boston Morning Journal on the lectern and began to read from the article on the Fifteenth Amendment.

Captain Kidd is in his "golden years", left a widower with two grown daughters and grandchildren. He's a bit restless, still on the road and not quite ready to settle just yet. He travels Texas offering readings of the news. People pay to hear him recite the news of the country and the world at large for various reasons-- some just like the social aspect of gathering with a group to hear the news, some are illiterate and incapable of reading the news themselves. Whatever their own personal reason, people gather for a dime a piece to hear Captain Kidd read.

While Captain is in Wichita Falls, he is approached with the request that he take a young captive and return her to her family. Young Johanna was taken captive at the age of six by the Kiowa after they had killed her parents and little sister, and adopted by a Kiowa couple. She was raised by Turning Water and Three Spotted as their own for four years, until the Kiowa decided that it was too dangerous for them to keep a captive white girl when there are soldiers always looking for a reason to battle. So she was traded back to the whites at the age of ten, finding herself surrounded by strangers she doesn't know or understand, frightened and confused and yearning to return to the only family she knows.

The Captain agrees to transport her back to her family, and so begins their three-week journey to San Antonio. Along the way they fight battles, both literal and figurative, with small victories occurring at every turn. Every smile and every English word is a victory, but as time goes on every step of the hoof and turn of the wagon wheel brings them closer to separation.

The author says in "A Note From the Author" that it seems all captive children who had been brought back to "civilization" had yearned to return to their Indian families, regardless of how little time they spent with their adopted families. The author says that her Irish character Doris Dillon said it best:


"...You can put her in any clothing and she remains as strange as she was before because she has been through two creations...To go through the first creation is a turning of the soul we hope toward the light, out of the animal world. God be with us. To go through another tears all the making of the first creation and sometimes it falls to bits. We fall into pieces. She is asking, Where is that rock of my creation?"

When trying to think of how this book made me feel, the word that came to mind was "wistful". Yes, "wistful", yearning, longing. You feel for this little girl who was ripped from the only family she seems to remember, the only life she knows, and given to a stranger to return her to people she doesn't know and info forced assimilation. You feel for the Captain, separated from his family who are living lives of their own, he himself alone in the world.

The author's writing is a bit like the wagon journey they are on-- slow, steady, and gets the story where it's going. It's not overly laden with flourish, nor overly emotional or descriptive, yet effective. Her characters are well formed and relatable.

My final word: This is one of those sweet and gentle reads, and at 200 pages, it's a fast read as well. There are moments of tragedy and heartbreak, but for the most part it is a sweet story as this old man wandering at the end of his life falls in with a young girl who is lost and seeking the nomadic yet grounded life she has known. The two of them turn out to be quite well-suited for one another, and the Captain will become more to this little girl than anyone ever expected. This is a good rainy-day read, to sit curled up with on a gray and overcast rainy or snowy day.

I received a copy of this book to review through HarperCollins and TLC Book Tours, in exchange for my honest opinion. I was not financially compensated in any way, and the opinions expressed are my own and based on my observations while reading this novel. The book that I received was an uncorrected proof, and quotes could differ from the final release.
Posted by nfmgirl at 1:00 PM

Back in college I took at class about the frontier and learned about the large number of white settlers who were kidnapped or otherwise adopted into Indian tribes. Regardless of the harsh treatment most experienced at first, almost none wanted to return to their white families. It was a fascinating class, and this book would have been a great addition to our reading!

Thanks for being a part of the tour!

I started reading this in the evening and stayed up late into the night to finish it. Just superb! A beautifully-narrated tale set in the Wild West, filled with gritty historical detail and a sweet human connection that will melt your heart.

While the story is slow-moving and occasionally cumbersome early on, it is ultimately engaging in a way that will grab your heart and make you cheer. It is both tender and tough.