REVIEW: The Broom of the System by David Foster Wallace (audiobook) 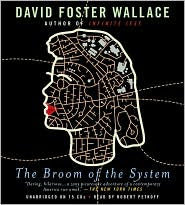 The "dazzling, exhilarating" (San Francisco Chronicle) debut novel from one of this century's most groundbreaking writers, The Broom of the System is an outlandishly funny and fiercely intelligent exploration of the paradoxes of language, storytelling, and reality.

About the Author
from Barnes and Noble Biography
Born in Ithaca, NY, and raised in Champaign, IL, David Foster Wallace grew up athletically gifted and exceptionally bright, with an avid interest in tennis, literature, philosophy, and math. He attended Amherst and graduated in 1985 with a double major in English and Philosophy. His philosophy thesis (on modal logic) won the Gail Kennedy Memorial Prize. His English thesis would become his first novel, The Broom of the System. Published in 1987 during his second year of grad school at the University of Arizona, the book sold well, garnering national attention and critical praise in equal measure. Two years later, a book of short stories, Girl with Curious Hair, was published to admiring reviews.


In the early 1990s, Wallace's short fiction began to appear regularly in publications like Playboy, The Paris Review, and The New Yorker, along with excerpts from his second novel, a complex, enormously ambitious work published in 1996 as Infinite Jest. Surpassing 1,000 pages in length, the novel was hailed as a masterpiece ("[A]n entertainment so irresistibly pleasurable it renders the viewer catatonic," raved Newsweek. "[R]esourceful, hilarious, intelligent, and unique," pronounced Atlantic Monthly), and Wallace was crowned on the spot the new heavyweight champion of literary fiction.


Hyperbole aside, Infinite Jest, with its linguistic acrobatics (challenging complex clauses, coined words, etc.) and sly, self-referential footnotes, proved to be the template for a new literary style. Subversive, hip, and teeming with postmodernist irony, the book attracted a rabid cult following and exerted an influence on up-and-coming young writers that is still felt today. The scope of Wallace's achievement can be measured by the fact that one year after the publication of Infinite Jest, he was awarded the MacArthur Foundation "Genius Grant."


Nearly as famous for his nonfiction as for his novels and stories, Wallace produced mind-boggling essays on assignment for magazines like Harper's. In contrast to his sad, dark, disturbing fiction, these essays -- subsequently collected into such bestselling anthologies as A Supposedly Fun Thing I'll Never Do Again Everything and More (1997), (2003), and Consider the Lobster (2007) -- were ridiculously exuberant, fairly bursting with humor, energy, and good cheer. Yet Wallace himself suffered from clinical depression most of his adult life. He was treated successfully with anti-depressants, until side effects from the drugs began to interfere with his productivity. At his doctor's suggestion, he stopped taking the medication.The depression returned, and he did not respond to any further treatment. In September of 2008, at the age of 46, he committed suicide.


Wallace's influence on contemporary literature cannot be overstated. Descended from post-war superstars like Thomas Pynchon and Don De Lillo, his style is clearly visible in the work of postmodernists like Jonathan Safran Foer and Dave Eggers. His untimely death was mourned by critics, writers, and millions of adoring fans. As author David Lipsky stated in a tribute that aired on NPR in September, 2008: "To read David Foster Wallace was to feel your eyelids pulled open."
My Thoughts
Oh my. I really don't even know how to summarize this book. Uh...a woman's grandmother goes missing from a nursing home, her excessively verbose boyfriend becomes overly insecure with their relationship and problems existing within their relationship become evident, the past returns, a bird becomes an evangelist, phone lines are crossed, alternate dimensions discovered...uh...that's just a little taste of what is going on in this thing.
This audio book was like a story with ADD. It was so hard for me to follow what was going on. So many characters and times that went all over the place. I don’t know how much of my difficulty in following the story was the fact that it was an audio book rather than the written word. There were a lot of one-sided conversations and recitation of old documents and transcripts, strange dialogue and rambling stories.
However, on a positive note, moments of the book exuded quirky dialogue that I loved:

“I could bludgeon you with my belly!” (NOTE: I want this on a t-shirt!)

”Time does not exist. I ATE IT! It’s in here. See? See the jiggle? That’s time- jiggling! Run! Run away! Fetch me my platter of fat, my nine cattle, or I’ll envelop you in a chin and fling you at the wall!”

”Lenore, it’s simply that I love you. You know that. Every fiber of your being is loved by every fiber of my being. The thought of things about you, concerning you, troubling you, that I don’t know about, makes blood run from my eyes-- on the inside.”

“Have you ever had intercourse with someone assumed to be of infinite size?” (Asked by the same individual above with the bludgeoning belly, and who is working to gain “infinite size”!)

There were also outrageously named characters like (all spelled phonetically, since this was an audiobook):

Do you have any idea how much I DISLIKE Rick Vigorous?! Jeez, his babbling stories drove me nuts. He is a very annoying man.

I had high hopes for this story, as I had heard such good things about it. But holy moley! To me this was just a babbling mess with about 5 different storylines wrapped up in one story. And not in a neat and brilliant sort of way, but in a mish-mash of confusion. And I don’t even know what to make of the ending. It felt like everything was left open-ended with nothing resolved. It felt like there was NO ending-- it just broke midway through the storyline. Perhaps if I had read this story instead of listening to the audiobook I may have a different takeaway and it would make more sense to me. But as it is, the audiobook made absolutely NO sense to me at all!
So I was not a fan of this one, but that's just me. There are obviously plenty of people out there who disagree with me and feel that this was a brilliant story! But for me, it shone dimly.
My Rating: 6.5 out of 10
Posted by nfmgirl at 2:12 PM

Thank you so much for my secret santa gifts!

We pretty much agree on this book. I finally posted my review: http://teddyrose.blogspot.com/2011/01/broom-of-system-by-david-foster-wallace.html