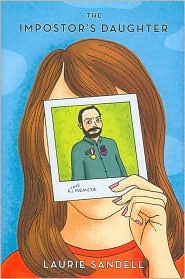 The Imposter's Daughter by Laurie Sandell

Laurie Sandell grew up in awe (and sometimes in terror) of her larger-than-life father, who told jaw-dropping tales of a privileged childhood in Buenos Aires, academic triumphs, heroism during Vietnam, friendships with Kissinger and the Pope. As a young woman, Laurie unconsciously mirrors her dad, trying on several outsized personalities (Tokyo stripper, lesbian seductress, Ambien addict). Later, she lucks into the perfect job—interviewing celebrities for a top women's magazine. Growing up with her extraordinary father has given Laurie a knack for relating to the stars. But while researching an article on her dad's life, she makes an astonishing discovery: he's not the man he says he is—not even close. Now, Laurie begins to puzzle together three decades of lies and the splintered person that resulted from them—herself.

I was surprised to see that this book was really a graphic novel. Perhaps someone somewhere in their review had mentioned it, and I interpreted that to mean that it "was graphically descriptive". So let me make this clear: this is a graphic novel, in that it is cartoonish drawings telling a story.

This was an entertaining story, and it was interesting to see the transformation that Laurie Sandell went through from a little girl who idolized her father to an adult woman who demonized her father to a more reconciled adult who seemed to accept her father more for who he was, and by the end of the story seemed to understand the idea of forgiveness.

This is a cute story and a quick read.

Email ThisBlogThis!Share to TwitterShare to FacebookShare to Pinterest
Labels: Review

I'm surprised too that it's a graphic novel. I also have read a few reviews and somehow do not remember this little detail :)
Anyway, I tried reading graphic novels once but they just do not appeal to me at all.

I've seen this one posted a lot, and yet somehow, I missed the part about GRAPHIC NOVEL. looks good; glad u liked it.

I've seen great things about this one, but not sure I need to read another graphic memoir right now. Maybe it's an acquired tasete?