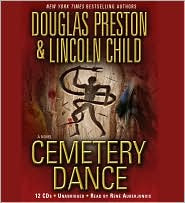 William Smithback, a New York Times reporter, and his wife Nora Kelly, a Museum of Natural History archaeologist, are brutally attacked in their apartment on Manhattan's Upper West Side. Eyewitnesses claim, and the security camera confirms, that the assailant was their strange, sinister neighbor-a man who, by all reports, was already dead and buried weeks earlier. While Captain Laura Hayward leads the official investigation, Pendergast and Lieutenant Vincent D'Agosta undertake their own private-and decidedly unorthodox-quest for the truth. Their serpentine journey takes them to an enclave of Manhattan they never imagined could exist: a secretive, reclusive cult of Obeah and vodou which no outsiders have ever survived.

The reading by Rene Auberjonois was a little distracting initially. He was a good reader, and used talented inflection to portray emotion. It was the quality of his voice that distracted me in the beginning. Where the voice of Peter Giles (who read The Scarecrow for my last audio book) had a somewhat "neutral" voice that allowed me to concentrate on the story, I found Rene's voice so distinctive that it distracted me. I'd sit there and wonder, "What is it about his voice? Is it an accent? What kind of accent is that? He reminds me of someone. Who does he remind me of?" Then I thought, "Wait! I know what it is! He reminds me of the guy that played Clarence in It's a Wonderful Life!" Henry Travers played Clarence the Angel. Do you remember his voice? That is who Rene Auberjonois reminded me of. That voice can be a little distracting initially! (You may remember him as security officer Odo in Star Trek: Deep Space Nine) However I found that after time I got used to it, and found he really did a good job, keeping the female voices soft but not cheesily "female" as some men will do when portraying the female voice. He really is a quite talented narrator, and a good choice given all of the french pronounciation required in this story.

The story was a little off-beat, what with all of the zombies and animal sacrifice. Typically zombie stories are one of my favorites, but I always find that I have a hard time of it when something fantastical like zombies is put in a modern-day story. It seems so out of place. My mind has a hard time lending any credibility to the storyline when fantasy and modern reality are blended. But, hey, that's my problem-- not the author's!

So, all that being said, what did I really think of the story? The story wasn't a bad story. It just felt like there wasn't too much substance to it. It felt a little empty. A little bit like fluff. But it was an enjoyable distraction to have while I'm at work, and it would be a good choice for listening to while in the car or doing housework. But I'm glad that I didn't "read" it, as I may have had a hard time having it hold my attention or really "filling me up". It's more like a light appetizer than a main course.

But kudos to Rene Auberjonois for being so good at what he did that he made me forget just how distinctive his voice was, and helped me to really "see" the characters of the story.

All in all, not a bad story. Not great, but not bad. It was okay.

GIVEAWAY: Win an audiobook of Cemetery Dance by Douglas Preston and Lincoln Child

I'm a follower - thanks.

I would love to be entered in your draw. Thanks.
wandanamgreb(at)gmail(dot)com

I just became a follower of your blog.
wandanamgreb(at)gmail(dot)com

Thanks for another super giveaway, you are awesome!
PS - I highly recommend ANY & ALL books/audios from Preston & child, they are superb :)